Japanese Puzzle Boxes: Everything you need to know 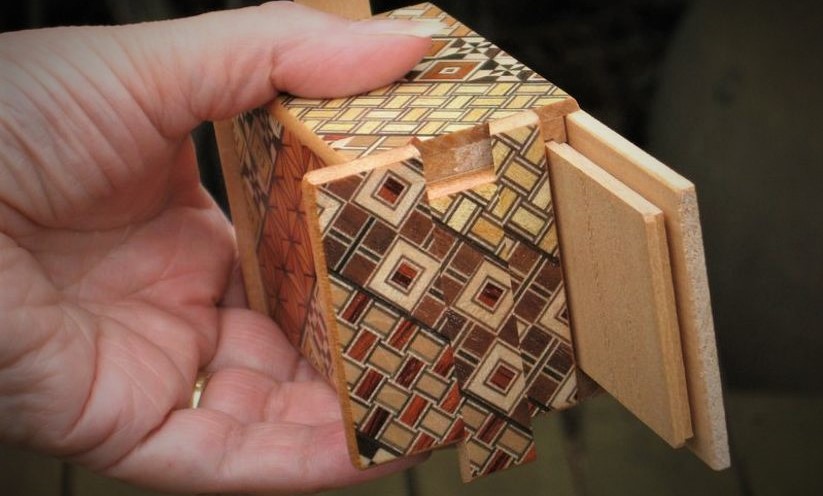 A puzzle box, also known as a secret box or trick box, is a six-sided wooden box with an obscured lid that can only be released following completion of a mechanical pattern or puzzle. Some puzzle boxes may require only a simple move, such as sliding a given tile on its lid a little to the right, while others require solving a series of unique, sequential movements to reveal the cavity within.

The origin of the Japanese puzzle box

The origins of the Japanese puzzle box can be traced to the Hakone region of Japan in the mid-to-late 19th Century, first referred to in a journal titled "Onsen Miage Hakone-sou" issued during 1830-1843, which translates to ‘Hakone Hotspring souvenirs’. In their early stages, these boxes were first known as 'Sikake-Bako' or 'Tie-Bako'. Sikake means device or trick and Tie means idea, wisdom or intelligence.

They were popular initially among workers and seamen to carry and keep their tools safe from theft. This was effective, seeing as the Sikake (device or trick) meant only the owner of the box—he who knew its secret—could get at the contents within. They were made with simple combinations in the beginning, but as the boxes became more popular, their tricks became more complicated.

For many years, the town of Hakone was an interchange station on the main road to present-day Tokyo (then Edo), and the puzzle boxes enjoyed success as souvenirs for travellers.

The Yosegi-Zaiku mosaic is a type of Japanese parquetry made by layering rods of different woods together to form a geometrical design pattern and then slicing the sectional surface into thin plates of wood. Some of the more popular scenes include mountain lakes, Mount Fuji and flying geese. Finishing coatings of lacquer are applied to add a glaze and sturdiness to the surface.

It was after 1870 in the Meiji Period (1868-1912), that three craftsmen, Mr Takajiro Ohkawa, Mr Tatsunosuke Okiyama, and Mr Kikukawa developed a puzzle box with the integration of Yosegi-Zaiku panelling to create the first Himitsu-Bako, meaning personal secret box. These gentlemen were first generation Himitsu-Bako Master Craftsman.

In May 1984, Hakone Himitsu-Bako and Yosegi-Zaiku were designated a National Traditional Handicraft by the International Trade & Industry Minister of Japan. In the Hakone area of Japan, there just 100 people working in the field of Traditional Wooden Products.

Himitsu-Bako craftsmen produce each puzzle box from start to finish. They each pick the wood they will use and then allow it to dry for a period of time. Next, they cut and assemble wood pieces to form the puzzle box, testing the mechanical motions carefully to ensure they cannot be cheated. Finally, they apply the Yosegi-Zaiku to the outside of the box. Since there are no drawings or instructional writings, learning to craft a traditional Japanese puzzle box requires a full apprenticeship with a true Himitsu-Bako Master Craftsmen.

Because there’s such intricacy in crafting a perfect Japanese puzzle box most are unique, and there are few suppliers in the world.

How to solve a Japanese puzzle box

Japanese puzzles boxes are typically described in ‘sun’ and ‘steps’. The ‘sun’ is a traditional Japanese measurement and refers to the physical length of a Japanese puzzle box, with one sun equal to approximately 3 centimetres (1.2 in), hence a "5 sun" box would measure about 15 centimetres (5.9 in) in length. Boxes are most typically between 3 and 6 sun in length.

Most Japanese puzzle boxes have a variety of different steps ranging from 4 to 66 moves. A few large puzzle boxes have exceptional numbers of moves, the most ever recorded is 1536! In a perfectly constructed box, the steps must be followed in perfect sequential order or the box will not open. These can be linear and nonlinear (meaning after the first step, the second step is not immediately obvious) and it doesn’t strictly follow that the more steps, the harder the puzzle box will be to open.

Puzzle boxes require special care in order to function properly, because of their fragile and small details in the opening mechanism. Keep them stored in a hot and humid-free environment and also away from the open air. Otherwise the wood can swell or expand, ruining the puzzling experience.

The appeal of the puzzle box is not simply its entertainment quality, but also its ability to store and secure secret or valuable items and trinkets. They can be very compact and portable, and it is for this reason they continue to prove highly popular and prized gifts and souvenirs.

Japan Craft stock a wide range of Japanese puzzle boxes in a variety of sizes and patterns.