AD538 The arrival of Buddhism to Japan, and incense use was transmit through Buddhist rituals
AD595 Agarwood drifts ashore to Awaji Island
It seems that the beginning of Koh, incense in Japan date from the same period as the arrival of Buddhism to Japan.“Nihon Shoki,”the first Japanese history book, states that in AD595, a sizeable chunk of agarwood drifted ashore at Awaji Island. When the island’s inhabitants burned the chunk, they noticed a wonderful new aroma. The locals presented the wondrous wood to the imperial court.

AD710 The relocation of the Heijokyo Capital, Nara prefecture
AD754 The visit of Ganjin (Jianzhen), who was a Chinese monk to Japan
He introduced the precepts of Buddhism, as well as many of the ingredients of used in Koh (Incense).The fabrication process of “Takimono” (Kneaded Incense) also arrived around this period.
In the Nara period, it is said that the ingredients of incense were burned directly. In this context, it is strongly believed that incense was used as a religious object because of its use as “Ku-koh,” for purifying Buddha and avoiding maliciousness. 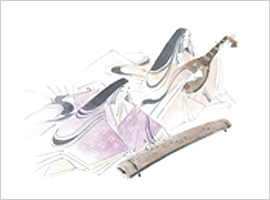 In AD 794, amidst the relocation of the Heiankyo Capital, Kyoto prefecture, various kinds of incense ingredients were imported to Japan from overseas. Takimono, or "Kneaded Incense," was the main kind of incense used in this time, and it was the result of the blending of many of these select ingredients. Japanese people embraced this type of fragrance. The enjoyment of elegant fragrance became a custom of daily life for the aristocracy. Literature of the Heian Period, such as "Makura-no-soushi" (The Pillow Book) and "Genji Monogatari" (The Tale of Genji), included many passages and references about Koh."

AD1192 The Kamakura government was founded by Yoritomo MINAMOTONO, the first shogun of the dynasty. The rise of warriors' status
Until this time period, "Takimono" (kneaded incense) had been the most popular form of incense with the aristocracy. Now, the pure fragrance of Agarwood itself was becoming more popular.

In AD 1338, the Muromachi government was founded by Takauji ASHIKAGA, the first shogun of the dynasty. Nearly 60 years later, the Kinkakuji Temple was built by Yoshimitsu ASHIKAGA, the third shogun of the dynasty. The Ginkakuji Temple was constructed by Yoshimasa ASHIKAGA, the eight shogun of the dynasty, in AD1489. During this progression of the Higashiyama culture, incense ceremony, much like tea ceremony and flower arrangement, became a kind of "Yoriai-no-Geido," a gathering to appreciate the arts. Koh-do had established itself as a unique art in Japan, and a preference for the appreciation of aromatic wood grew among warriors. At the time, much of the good aromatic wood was imported to Japan via its successful trade relationship with China. It is said that Doyo SASAKI, a well known figure in the book of "Taiheiki" (a Japanese historical epic), collected hundreds of varieties of aromatic wood. 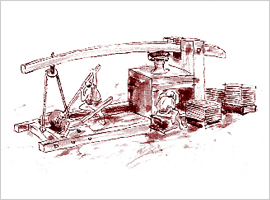 AD1603 The Edo government was founded by Ieyasu TOKUGAWA, the first shogun of the dynasty. Koh-do, Incense Ceremony flourished. During this period, the process of manufacturing stick-shaped incense was imported from China. Stick incense was the style of Koh that was primarily used by the Japanese middle class. Koh-do, Incense Ceremony which had been developed in the Muromachi period, was now being adopted by the commoner. As times change, Japanese incense manufacturers are continually developing new fragrances fitting for today's lifestyle in Japan; in the process, they are creating a new incense history.

About 300 years ago (in 1705), Moriyoshi Rokuzaemon HATA, who headed the Tanba-Sasayama district of the present Kyoto prefecture, created a store called "SASAYA." Rokubei Moritsune HATA, who represented the third generation of the Hata family to be involved in making incense, began incorporating methods of creating incense he learned while working at the Imperial Palace in Kyoto.

He applied the court's secret traditions of blending incense that had been previously enjoyed exclusively by royalty. After nearly three hundred years, the Hata family continues the legacy of their innovative ancestors, offering a wide variety of unique, hand-blended incense.

Today, Shoyeido is considered the highest quality, most natural incense available in the world.

The artful blending of carefully selected natural ingredients makes Shoyeido’s incense unique and exclusive. The finest quality ingredients are procured by master blenders and skillfully crafted to perfection.
The blending process requires an enormous amount of skill. When blending with natural ingredients, the quality, balance and ratio of each element is critical. The slightest variation in amount or quality of any component can dramatically influence the resulting fragrance. The amount of moisture, along with drying time and production methods, can also strongly affect the scent. Shoyeido has been refining these techniques for three hundred years ensuring that nothing goes to waste in this detailed production process.

The ingredients are finely ground and carefully mixed with a powdered, natural binding material, “Tabuko.” Up to fifty varieties of herbs and spices are precisely blended with pure water, quickly shaped, and dried very slowly.
As it is made with such care and contains the finest natural ingredients, Shoyeido incense matures and improves with time. The scent becomes deeper and more mellow, reflecting the subtlety and refinement for which Shoyeido is known.

Traditional Japanese Incense from the Finest Ingredients A Gift of Nature

Many kinds of unusual roots and bark are used, such as magnolia, peony and cypress. Our master blenders also use plants and spices to create our products. These ingredients have been highly prized for centuries.

This is the most popular shape of incense.
Various fragrances and lengths are available for scenting a large room or for religious use. Burning times are proportional to stick lengths. It is possible to adjust the burning time of an incense stick by cutting it. Because stick incense has uniform thickness, it fragrance is released evenly and gradually.

Soft textured and non-scented tree of the genus Aquilaria accumulates crystallized resins while being withered by various natural causes. The longer it is seasoned, the more refined the aroma becomes, often taking several centuries. It is naturally grown in the Southeast Asian countries, Indonesia, India and the Kainan province of China. It is highly valued for Japanese incense ceremonies for its aged aroma, and is also traditionally used for soothing or relaxation purposes.

The highest grade of Agarwood is called Kyara, which means "precious" in ancient Japanese. Kyara permeates deeper aroma and is more resinous than the average Agarwood.

The sweet, balsamic resin from a tall deciduous tree of the family Styracaceae, Benzoin is found in tropical Sumatra. It yields a warm, mild scent.

Derived from the camphor tree, the family Dipterocarpacae. Borneo Camphor is a crystalline substance, which accumulates in the gaps of the trunk. A natural insect and moth repellent.

The dried root of a plant, native to Vietnam, and also grown in India and southern China, this plant bears delicate, fragrant, orchid-like flowers; and is highly prized for its warm, sweet and spicy fragrance.

Clove is the dried flower buds from tall evergreen trees, the family Myrtaceae, and is native to the Molluques and Zanzibar Islands. Its hot, spicy scent has made it one of the most well-known spices in the world.

One of the most highly prized substances in the ancient world, Frankincense has been used in the ceremonies of many religions. It is found in the resin of trees, the family Burseraceae, grown in northeast Africa, the coasts of the Arabian Sea and Somalia. Known as a pain-relief agent in herbal remedies.

The dried bark from a plant of the family Lauraceae, Cinnamon is produced in the southern provinces of China, Vietnam, Sri Lanka and Indonesia. One of the oldest spices known to man, it was traded between India, China and Egypt over 4,000 years ago. Cinnamon is mentioned in the Bible, as well as Greek and Roman pharmacopoeia.

Considered one of the main medicinal and culinary plants, the dry fruit from the family Magnoliaceae has a lively, sweet and herbaceous scent and is mainly grown in the southern provinces of China. A popular ingredient for Chinese cuisine.

A Large variety of powdered aromatic wood, herbs and spices is measured accurately and mixed according to the type of incense. The powders are sifted to mix evenly and remove particles.

Measured amounts of sifted powders are kneaded gradually with the addition of warm water and mineral colors.

Measured amounts of sifted powders are kneaded gradually with the addition of warm water and mineral colors.

A hydraulic extruding machine compresses the cylindrical "dough" through the small holes of the steel mold, called "Sugane," into the form of long strands similar to a spaghetti noodle. A board, called "Bon-ita" catches the soft strands of incense. Both ends of the stick incense are trimmed by hand with a bamboo knife.

Soft incense is removed from the Bon-ita and put onto another wooden board, called a "Tehon-ita", and laid very closely next to each other.

Cut the end of any incense that sticks off of the Tehon-ita to make it even. Move again, to another board to dry. At this point, some of them are cut further to meet product specifications.

The drying boards are piled up with a little space between them. Incense is dried slowly in a few days.

The dried incense sticks are weighed and bundled in the appropriate quantity for the final packaging.