What is the difference between kimono and yukata? 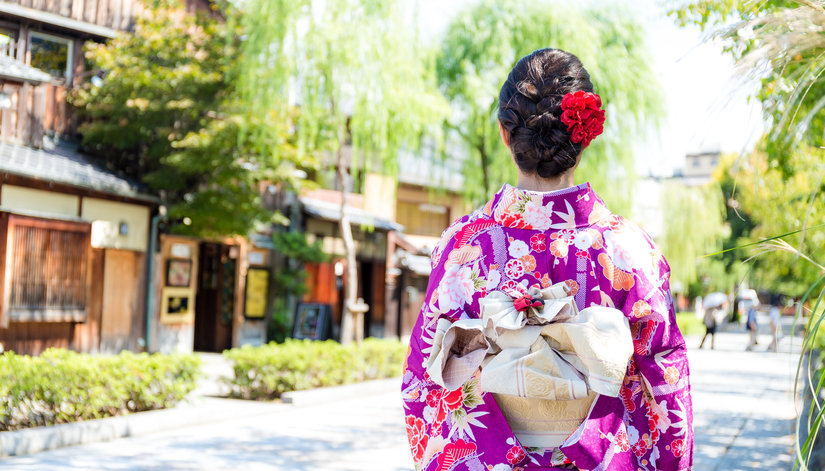 What is a kimono?

The kimono, which translates to ‘thing to wear’, is a traditional style of dress in Japan that dates back to the 5th Century. Both men and women wear kimono, which is a loose, full-length garment with wide sleeves and tied with a sash.

Kimono, traditionally made of silk, consist of twelve or more parts, which can make them somewhat bulky to wear. The first layer is the underclothing, which consists of an inner kimono called the nagajuban and an optional hadajuban, which is like an undershirt. The kimono layers are secured in place with a thin sash called a koshi himo.

The outer kimono layer is worn on top, carefully folded and fitted (read how to wear a kimono below). A colourful belt called an obi is worn over the outer kimono. Traditional kimono footwear, called zori, are sandal-like shoes made of fabric or vinyl and stitched between the big toe. They must be worn with white tabi socks.

Men’s kimono tend to be more simple, and come in muted colours like black, grey, brown and dark blue. Originally worn as an undergarment by the Japanese aristocracy, the kimono was later adopted as outerwear by the Samurai class. On formal occasions, it is common for men to wear a formal black silk kimono called a montsuki over a white under-kimono layer, with traditional japanese trousers known as hakama.

Men also wear zori footwear usually made of imitation plastic straw. Unlike women, they are not typically required to wear tabi socks.

Since the kimono was first introduced, styles have shifted and evolved to denote the wearer’s social rank and occupation. Today, few Japanese people wear kimono on a regular, day-to-day basis because they are considered to highly formal. No two kimonos are the same, as their designs are highly unique.

What is a yukata?

A yukata is a kimono-like garment that became popular during the Muromachi period (1392-1568), but it is far more casual. Unlined and usually made of cotton to make the fabric more breathable, yukata are generally worn in summer and are popular forms of dress for events such as firework festivals. Yukata are often attractive tokens of cultural appreciation for tourists and foreign consumers.

Yukata are typically worn with a type of footwear called geta, which are informal sandals with a high platform made of wood. Men are more likely to wear kimono than yukata, but male yukata are becoming more popular as they evolve with more fashionable styles.

Yukata date back as far as kimono, originally worn by the noble classes to travel back and forth from baths in the days before towels were used. Being much cheaper than the silk kimono, yukata became particularly popular during Japan’s Edo period (1603-1868) when there were strict laws that prevented people from living extravagantly.

How to wear a kimono

Kimono should always be worn with the left panel over the right; wearing a kimono incorrectly is considered rude, as Japanese culture is to dress the dead right-over-left.

Kimono should also be worn with a fold around the body called an ohashori. This is created by lifting the kimono so the hem sits at ankle height, tying it in place and folding down the excess fabric. For women, it is considered a little transgressive to wear a kimono without the ohashori fold. 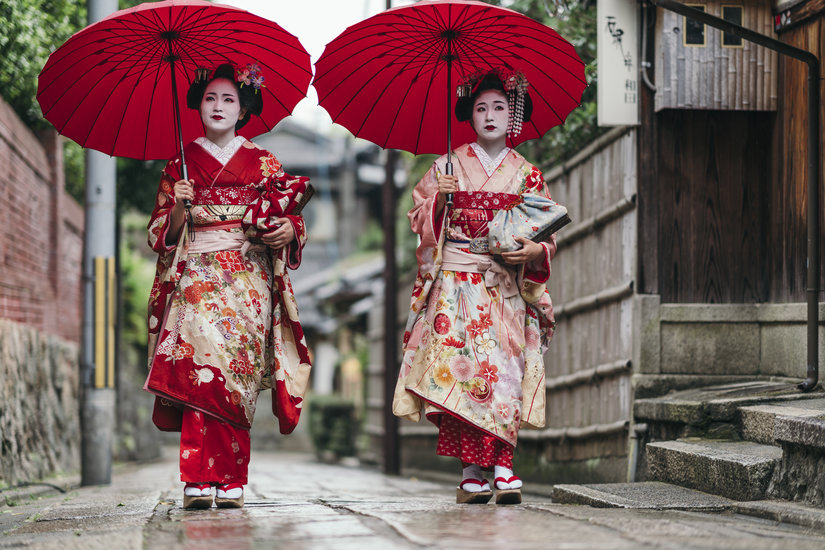 How to wear a yukata

Yukata have far fewer components than kimono, but should also always be worn with the left panel over the right. Because they’re typically made of cotton, it’s not necessary to wear a nagajuban underneath.

As with kimono, women are expected to adjust the length of a yukata by making an ohashori fold, but the obi worn with yukata is narrower and some yukata makers even stitch the obi into a pre-tied bow. Men are not required to make an ohashori fold in their yukata, but men’s obi are tied lower on the waist. In accordance with culture and tradition, men are encouraged to fashion a fuller belly by wearing a special yukata pad.

What types of kimono are there?

Kimono can be worn year-round and have different seasonal variations. They can be unlined for wearing in summer, lined for autumn and spring, and padded versions are suitable for winter months. There are different types of kimono for different occasions, and certain styles are used to depict a wearer’s social status.

A komon is a more casual type of kimono that can be worn throughout the year by both married and unmarried women. Young unmarried women can also wear furisode, a type of kimono with long sleeves which indicates she is eligible for marriage. There are a variety of ceremonial kimono worn for special occasions, which vary depending on the region.

There are also different types of obi, or belt. Hanhaba obi is the informal obi for everyday wear, while a fukuro obi is the much larger, ceremonial belt tied in a large bow behind the back, worn on formal occasions. It is also common to wear obi accessories, such as the obiage, a wide length of silk tied around the torso and underneath the obi like a corset, and the obijime, a decorative cord that helps to keep the obi knot in place.