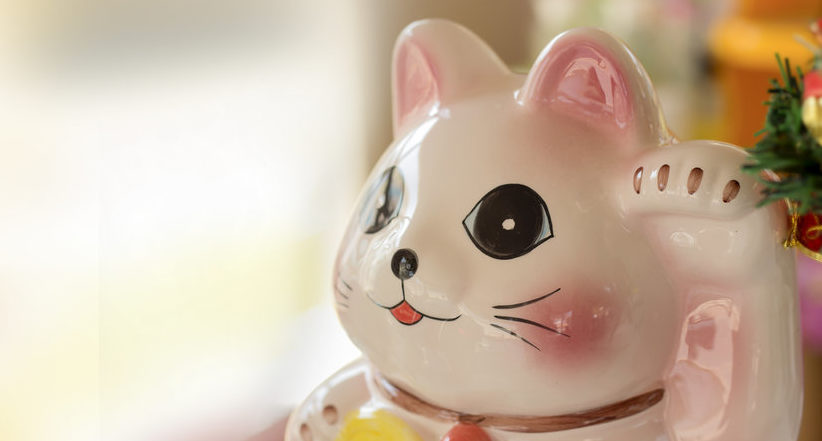 Maneki neko is most often displayed in shops, restaurants and other businesses, although the increased popularity of the figurine in souvenir shops has seen its introduction as a decoration in the home.

Antique examples of lucky cats may be made of carved wood or stone, handmade porcelain or cast iron. Particularly expensive examples may be made of jade or gold. The maneki neko of old certainly possess the craftsmanship and beauty that is the hallmark of Japanese folk art. Modern examples are typically ceramic, but can also be made of plastic, wood and papier-mâché.

The origins of the Lucky Cat

The true origin of the Lucky Cat is disputed, but most will agree that Lucky Cats first appeared during the Edo period in Japan (17th to mid-19th Century).

A number of popular legends attempt to explain the origins of the Lucky Cat: The first, known as The Temple, tells the story of a wealthy man who took shelter from a rainstorm under a tree close to a temple, where he noticed a cat beckoning him inside. Shortly after, lighting struck the tree under which he had been sheltering and in thanks, the wealthy man purchased the temple bringing it much prosperity. After his death, a statue of the cat was erected in his honour.

The second legend follows the story of a Geisha whose pet cat was one day found clawing at her kimono and beheaded by the brothel owner who believed the cat to be possessed. The flying cat head landed on a snake which was about to strike, killing the snake and saving the geisha. Distraught by the loss of her cat, the geisha was gifted a cat statue by a customer to cheer her up.

The final legend regards an old woman, living in Imado in eastern Tokyo, who was forced to sell her cat due to extreme poverty. Soon afterwards, the cat appeared to her in a dream instructing her to make a resembling statue of the cat in clay. She did so and made a fortune from the sale of likenesses.

The significance of the raised paw

Almost every Lucky Cat design will feature at least one raised paw. This is to replicate the Japanese beckoning gesture as made by holding up the hand, palm down, and repeatedly folding the fingers down and back. Some maneki neko made specifically for Western markets feature the cat’s paw facing upwards in a beckoning gesture that is more familiar to most Westerners.

In some modern interpretations, the paw is designed to wave back and forth using an electrical motor. Again, it’s a result of western cultures that this has become popular, owing to the association of a raised hand as waving rather than beckoning.

Commonly, the right & left paws both invite business-related prosperity, but some suggest the left paw is more associated with businesses of the night, such as bars, geisha houses & restaurants. 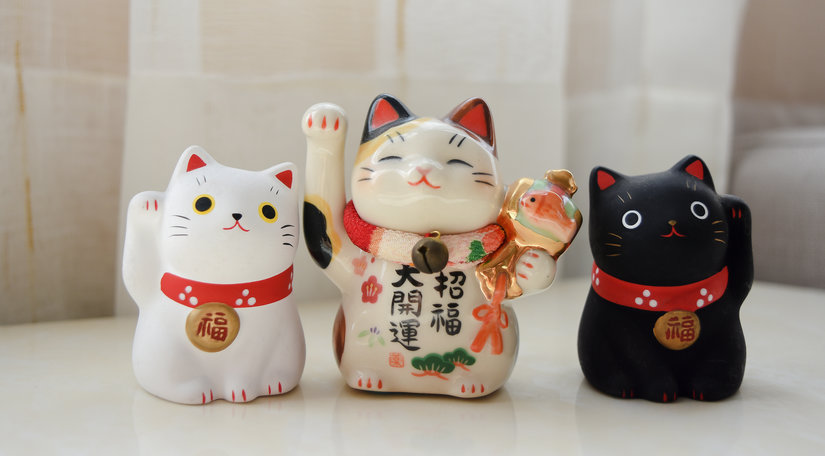 The symbolism of colour

Calico is the traditional colour combination, considered to be the luckiest. White cats are generally believed to bring happiness, purity, and positive things to come, while gold cats promise wealth and prosperity.

Some colours tend to have regional significance and variation. For example, merchants in Kyoto are said to favour black cats for their shops while those in Tokyo feel that black is unlucky. In some areas black cats are said to be talismans against disease, while others believe they have the power to ward off evil spirits.

Purple cats bring prosperity and opportunity, while green cats bring luck to scholarly endeavours. Red cats can symbolise success in love and relationships, but in earlier times were thought to ward off the measles. More commonly, it’s green or yellow maneki neko that are thought to bring good health.

The meaning behind adornments and attire

Maneki Neko tend to wear a bib, collar (traditionally red) and golden bell, the latter thought to bring good fortune. The bibs often come in brilliant hues of red, blue, green, and yellow, mostly moulded into the form itself, though scarves of chirimen or silk can be tied behind the neck in intricate knots. Pet cats were often dressed this way in the early periods.
The pairing of gold coins with maneki neko promotes wealth, and can be traced back to one specific cat memorialised at Eko-In Temple in Tokyo. A tombstone was erected to a cat believed to have delivered gold coins to a fishmonger left unable to work due to illness, with the epitaph “an animal that did good and virtuous acts.”