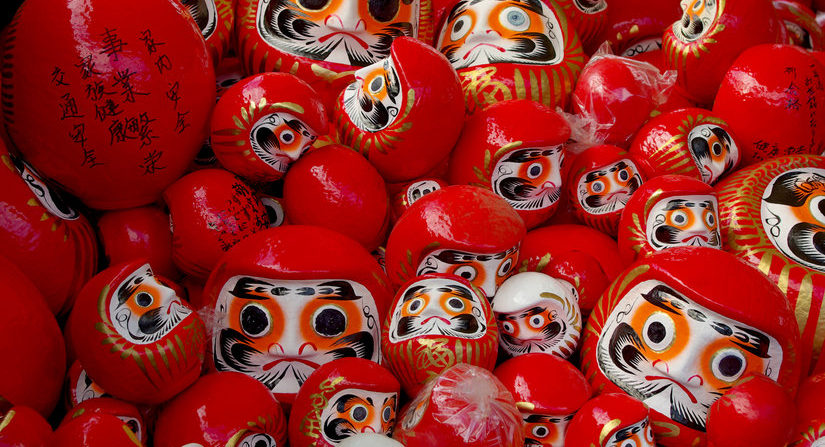 The round and hollow Daruma doll usually has blank eyes when sold. Tradition holds that when the owner makes a goal or wish, they can paint a pupil on one of the doll’s eyes. When the goal or wish comes true, they can then paint in the second eye as a sign of accomplishment.

It is for this reason that they make popular gifts of encouragement for children and adults alike.

Bodhidharma was a Buddhist monk, credited with transmitting Chen Buddhism to China and establishing the Zen school in Japan around the 5th or 6th Century. In Japan, he is known simply as Daruma, hence the eponymous ‘Daruma doll’.

Throughout Buddhist art, Bodhidharma is usually depicted as an ill-tempered, bearded, westernised figure, sometimes referred to as the ‘The Blue Eyed Barbarian’. But contrary to this imagery, two legends associated with Bodhidharma are considered the basis of the Daruma doll design.

Popular legend claims Bodhidharma sat wall-gazing for a period of nine years in deep meditation. In one story, it is claimed the practice resulted in his arms and legs falling off through lack of use. Another story reports that after accidentally falling asleep, he cut off his eyelids in an effort to prevent doing so again.

It is this model of the limbless, eyeless figure dressed in the red robes of a Zen Buddhist monk upon which the Daruma doll’s form is modelled.

The symbolism of the Daruma doll

The design of a Daruma doll is rich in symbolism. The shape, colour, eyes and facial hair that adorn Daruma all have different meanings.

Daruma dolls are typically hollow paper-based structures with a weighted bottom that ensures they will always return to an upright position when tilted over. This tumbler-style doll is similar to an earlier toy, known as the Okiagari Koboshi, a self-righting monk figurine.

The characteristic has come to symbolise the ability to overcome adversity and recover from misfortune. In Japanese popular culture, illustrations of Daruma are often accompanied by the phrase “Nanakorobi Yaoki”, which roughly translates as “seven times down, eight times up”.

A red Daruma brings luck and good fortune. It is the most common owing to the association of the doll with the red robes of Zen Buddhist monks. It is also thought that red was chosen with reference to recovery from sickness, the colour having been strongly associated with measles and smallpox in Japan’s late Edo period.

But there are other colour variations which, like the Japanese Lucky Cat, symbolise a range of different fortunes. A Golden Daruma doll, for instance, is thought to bring wealth and prosperity, while a purple doll symbolises career success. Pink dolls bring good fortune in love and marriage, white represents new birth, and a green doll is thought to endow health and vitality.

The eyes of a Daruma doll are most often blank at the point of purchase. The person receiving the doll then fills in the pupil of one eye upon setting a goal, and only completes the second upon achieving it. In this way, they are reminded of the goal needing to be fulfilled every time they see the one-eyed Daruma.

This refers to a phrase that that translates as “Both Eyes Open”, meaning ‘opening’ the second eye in realisation of an achievement. It’s also thought related to the ideal attainment of Buddhism: enlightenment.

The Daruma’s facial hair is intended to represent the animals regarded in Asian culture to embody longevity: the tortoise and the crane. The doll’s cheek hair pattern is supposed to resemble the shell of a tortoise, while the eyebrows are meant to emulate the shape of a crane.

This motif aligns with the Japanese proverb, “The crane lives 1000 years, the tortoise 10,000 years.”

In some regions of Japan, achieving a goal is celebrated in an annual Daruma-burning ceremony. At these events, people turn their ‘completed’ Daruma over to a local temple, where after a solemn expression of gratitude, reading of the sutras and blowing of horns, the Daruma are set aflame.

After the burning of the Daruma, a new doll is purchased upon which to set goals for the new year.