The hidden language of Japanese embroidery 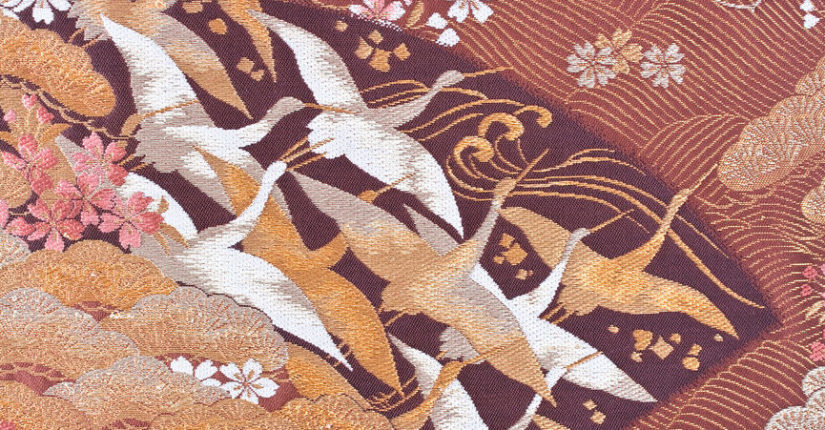 Japanese embroidery, known natively as nihon shishu, is an embroidery technique that originated in the Kofun Period more than 1,600 years ago. The technique uses intricate patterning, silken threads and symbolic motifs worked on fine silk fabrics.

Nihon shishu was originally used for decorating items used during religious or spiritual ceremonies, but over time came to serve a more artistic purpose. During the early stages, the finest Japanese embroidery was only available to those in the highest ranks of society. However, years of trade, migration and multiculturalism has brought this cultural heritage to a much wider audience.

Many kimonos are decorated in Japanese embroidery. Early kimonos were the dominant item of clothing for aristocrats who wore them as a symbol of their status and wealth. In the present day, kimonos are often worn by Geisha or at formal occasions such as a weddings and tea ceremonies. Because of this, the decorative motifs and fabrics that embellish these garments have garnered great significance throughout history.

A guide to the symbolism of Japanese embroidery

Embroidery on kimonos, including family crests, are crucial to understanding the occasion where the garment would have been worn, by whom and at what time of the year.

Floral motifs are one of the most common design elements. Botanical symbolism is so popular in Japan that it is considered to be a language of its own. Hanakotoba, the Japanese “language of flowers”, holds that each flower has its own meaning determined by its physical attributes or historical connotations. Each flower symbol can therefore be used to convey a specific emotion or sentiment without the need to use spoken language. Here are a few examples:

Cherry blossom (sakura) is revered in Japanese culture. With it’s distinctive notched petals and brief blooming time, it has come to symbolise renewal, beauty and the transience of life.

Peonies (botan) are known as the “King of Flowers” and are a symbol of good fortune, bravery and honour.

Pine trees (matsu) are associated with winter and the new year. The evergreen pine has come to represent longevity, good fortune and steadfastness.

Chrysanthemums (kiku) are the symbol of the Emperor and Imperial family, appearing on Japanese passports, the 50 yen con and the Imperial Seal. It is said to represent regal beauty, longevity and rejuvenation.

Carnations (kaneshon) commonly symbolise love and fascination. They’re often given as a gift on Mother’s Day in Japan.

From an early age, Japanese people are taught that humans and animals share the same eternal moral principle and are both integral parts of nature. In Japanese embroidery, animals carry cultural connotations and represent various aspects of life:

Cranes (tsuru) are believed to have lived for a thousand years and, according to folklore, inhabit the land of the immortals. As a result, they’ve come to symbolise longevity and good fortune. A pair of cranes represents a happy marriage.

Dragonflies (tombo) are emblematic of the warrior classes and often feature as a motif on military implements. Consequently, the dragonfly has come to represent victory.

Spiders (kumo) is seen in Japan as a symbol of industry. Japanese folklore holds that the appearance of a spider foretells the visit of a good friend.

Swallows (tsubame) are annual migrants arriving in Japan in the early spring. The swallow is also a symbol of good luck, fidelity in marriage, and fertility.

Dragons (ryu) are believed to bring prosperity and avoid evils. The dragon is widely regarded as a symbol of fortune or royalty.

Butterflies (batafurai) are viewed in Japan as souls of the living and the dead. In embroidery, butterflies are evocative of joy and longevity. 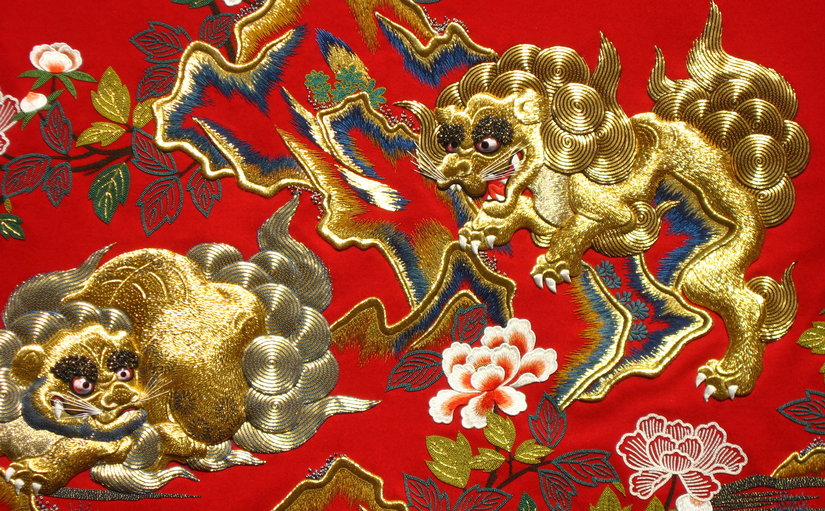 The hidden language of Japanese embroidery is not restricted to flora and fauna. Objects popular in oriental culture are also embedded with spiritual significance. Even the shapes that make up geometric patterns are considered to hold deep meanings.

Mountains (yama) depict the sacred space between heaven and earth. A bird flying over a mountain signifies the overcoming of life’s challenges.

Rivers (kawa) or streams symbolise the flow of life and represent continuity into the future.

Drums (taiko) primarily represent joy. However, taiko were historically used to motivate warriors and became synonymous with war. Because of this, a drum pictured with ivy growing over it symbolises peace.

Seigaiha is a pattern of layered concentric circles creating arches, often resembling waves or water. These waves can symbolise power, resilience and surges of good fortune.

Shippo is an infinitely repeating circular pattern representing the seven jewels or treasures from the buddhist sutras.

Kikko is a hexagonal pattern that mimics the markings on a tortoise’s shell. Much like the symbolism of the tortoise, kikko signifies longevity and good fortune.